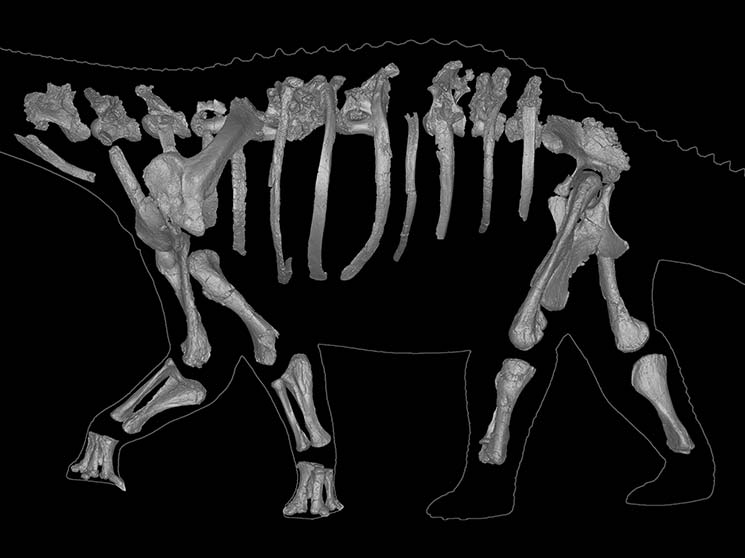 I am a heavily-built titanosaur, which is a group of sauropod dinosaurs that lived around the world during the Cretaceous period, when western Queensland was covered by vast floodplains. My first fossil was found buried in an ancient billabong, mixed with bones from aquatic animals such as turtles and crocodiles, as well as the theropod dinosaur, Australovenator. Multiple fossil specimens of me have been found, suggesting I was probably a relatively common dinosaur.

How big was I?
I was estimated to be 15–16 metres long, and weighed 15–20 tonnes. This is equivalent in length to two garbage trucks and would have weighed more than two adult male elephants.
When did I live and what did I eat?
I lived during the Cretaceous period, 92–96 million years ago. I ate plants, probably predominantly seed ferns, ferns, conifers and early flowering plants.
Where was I found?

My skeleton was found in Winton district, central Queensland, where the Traditional Owners are the Koa people. My bones were found by the pastoralist, Sandra Muir, on her property.

About my name
I was named by Queensland Museum Senior Curator Scott Hocknull and his colleagues. I was named Diamantinasaurus matildae, for the Diamantina River in western Queensland, and for the song “Waltzing Matilda”, which was first performed in Winton.
What makes me special?
I am known from multiple specimens, which makes me among the most well known sauropod dinosaurs from Australia. I am also the first Australian sauropod for which part of the skull is known. My close relatives and I have only had our fossils found in Queensland.
Where can you find information on me?

You can find me on display at the Australian Age of Dinosaur Museum, Winton.