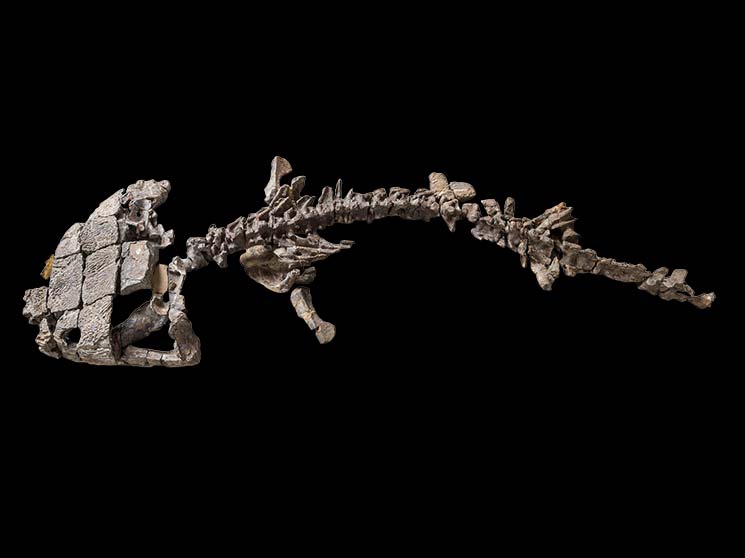 I was more than three metres long with a massive head and a huge jaw bristling with teeth. I was an ambush predator that looked like a crocodile, but was more closely related to amphibians. My skeleton is nearly complete and is one of the few vertebrates known from the Jurassic period in Australia. At the time of its discovery, I was the youngest member of my lineage, the temnospondyls, which had been thought to have died out much earlier. New studies from Victoria show that related temnospondyls survived much longer in Australia.

How big was I?
I was more than three metres long, which means I was longer than a ping pong table.
When did I live and what did I eat?
I lived during the Jurassic period, approximately 176 million years ago. I ate fish and other smaller vertebrates.
Where was I found?

My near complete skeleton was found near Wandoan in south east Queensland by property owner, Colin Kehl.

About my name
I was named by La Trobe University palaeontologists Anne Warren and Mark Hutchinson. The first part of my name, Siderops, alludes to my skeleton being preserved in ironstone (Sideros- being Ancient Greek for iron, and ops - face), with the second part of my name, kehli, honouring my discoverer Colin Kehl.
What makes me special?

At the time of my fossil’s discovery, I was the youngest temnospondyl known from anywhere in the world and the only significant Jurassic-aged temnospondyl from Australia.

My three-dimensionally preserved skeleton makes me one of the most complete Jurassic-aged temnospondyls known from anyhere in the world. . My massive skull has rows of sharp, fang-like teeth.

You can find my fossil at the Lost Creatures Exhibition, Queensland Museum.